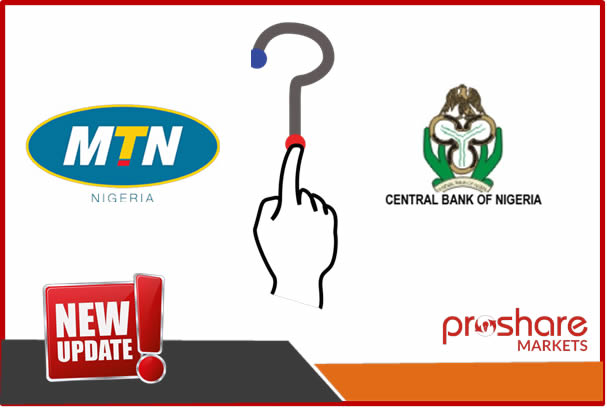 During the week, MTN Nigeria was sanctioned by the Central Bank of Nigeria (CBN) over allegations of impropriety in the repatriation of funds from Nigeria. Please find below highlights of the story:

This is to help people understand the issues surrounding the recent fine imposed by the CBN on 4 banks and the request that they should refund $8.1 Billion in "illegally repatriated" dividends.

This issue first come into the open in Sept 2016 when Senator Dino raised a motion accusing MTN of illegal repatriation of $13.92 billion to its parent company through 4 banks between 2006 - 2016 with the help of the Minister of Industry, Trade and Investment; Okey Enelamah.

The Senate then mandated its Committee on Banking, Insurance and other Financial Institutions to carry out a holistic investigation on compliance with the Foreign exchange (monitoring and miscellaneous) Act by MTN Nigeria & Others

The Minister of Communication Mr Adebayo Shittu warned the Senate “to Protect MTN and that the action could scare away investors while the Minister of Industry & Trade Dr. Okey Enelamah dismissed the allegations as baseless since he did not own any shares in MTN as alleged.

In one of the interesting testimonies, the CEO of MTN NG, Mr. Moolman admitted that it failed to comply with the law requiring issuance of CCI within 24hrs of conversion because it was a mere “administrative requirement”. I'll come to this later.

In Oct 2016, it was further reported (or was it rumoured) that the CBN had ordered the stop of dividend payouts to MTN NG. It seems that this was the first hint of an investigation by the CBN on this particular issue.

In Nov 2017, the Senate eventually cleared MTN NG of the allegation of illegally repatriating $13.92 Billion and also exonerated the Minister of Industry and Trade Dr. Enelamah of any wrongdoing. We thought the matter was closed. But we were wrong.

What does the FX Act/Manual Say?

The act (and memorandum 22 of the manual) prescribes that any foreign capital imported into Nigeria for the purpose of investment must be converted to Naira within 24 hours of its arrival and CCI issued by the authorized dealer (Bank).

The Certificate for Capital Importation (CCI) can either come in form of Cash or it can come in the form of Equipment imported into the country. Either way, the requirements and process for the issuance is well spelt out in the Foreign Exchange act and manual.

So what is the CBN’s case against the banks and MTN NG?

According to the CBN, their investigation revealed the following:

I know for a fact that yesterday, there were indeed frantic calls from major capitals to their Nigeria CFOs to be sure they are on solid footing. It is also likely that banks will be more careful going forward to ensure compliance with the rules on capital importation.

It is instructive that compared to MTN NG, the reactions of the indicted banks has been relatively measured. It could well be that they don’t want to take on their regulator or it could also mean that they know that they’re in the wrong.

This movie is far from over. It is just getting started. This is not THE END.